Eat- Bathua Raita
Prey- Bathua leaves
Love- Totally
After the move to GGN, i was on a hunt for a gym which provides functional training...
Now i dont like sports..NO...but i love having an athletic figure and stamina..(who doesnt!)..so the hunt ended at Crossfit. So 3 days a week i am seen trying to lift a bar, throw some sand bags on a wall, attempt a rope climb (and fail miserably) while competing with burly men who have quadraceps the size of my waistline (FYI my waistline will soon resemble Lara Dutta's 7 month baby bump, just that i cant blame it on pregnancy)!!
Crossfit requires healthy real food eating and since pizza isnt healthy, i am on the hunt for some healthy food apart from my usual affair with corn in various forms. The markets here are flooded with all sorts of leaves and one particular bunch that caught my eye was Bathua..
Fat Hen, Lamb's-quarters, Pigweed, Goosefoot are the 'inglis' names of Chenopodium album commonly known here as Bathua....i approached an old lady who was choosing plum tomatoes (for her rich shahi paneer i guess!), seeking advise on what to do with leaves and she gave an animated description of the leaves and the recipes using it and 5 times in our 5 minute conversation said 'beta bathua bahut tasty hai' (i cudnt register anything apart from that line!). That was enough to sell me a big bunch of the leaves!!
2 hours of cleaning the leaves, boiling then with some green chilly (for some heat),  blending the leaves into a paste, letting the water evaporate, adding chat masala and beaten yoghurt, i was ready with this...Bathua Raita 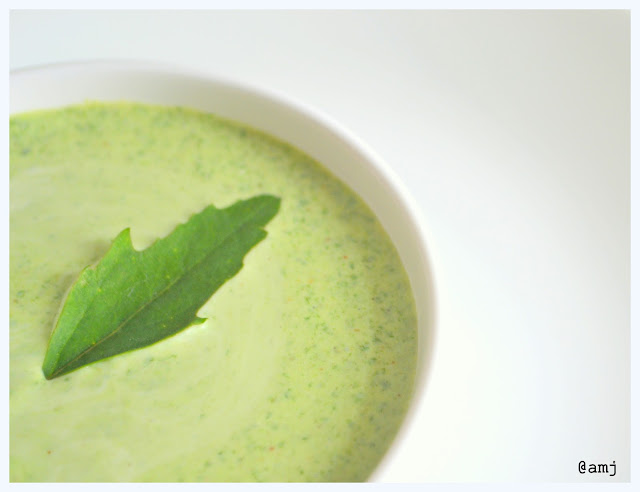 Had an entire bowl for lunch and felt good eating healthy.. :)
Bathua supposedly can defeat Spinach in terms of its calcium and other goodness...it is used in the treatment of various illness at home....guess Popeye the Sailorman wasnt aware of this!! Hence this recipe is submitted to Meeta's Monthly Mingle  hosted by Add to Taste as a Heart Healthy recipe...

But i am sure many of us 'city dwellers' wouldnt pick up this leaf because hey it hasnt been featured on TLC or Rocco doesnt make ravioli out of it!!
Now can we please have decent name for this wonderful, flavourful gourmet leaf!!

Never heard of this one.
I went through a "living healthy" phase a few months ago. All soups and salads and baked fish days ( did sneak in a cheesecake or two) , but got bored of it in a few weeks :-(

i have been trying to follow it for nearly a year now...but its in phases...i eat healthy, lose weight, come back to 'good' shape...then i eat durrty carbs, fat and empty calories..gain weight and then again go thru detox phase...